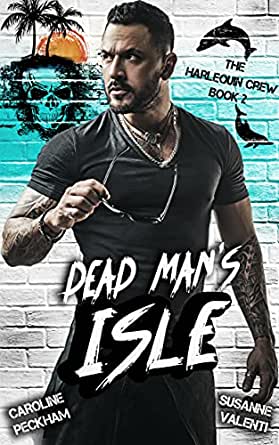 This is the second book in the Harlequin Crew series

I’m the girl who no one wanted. Or the one who got away. Depending on who you ask.

Either way, betrayal and heartache have been my friends for far too long and it’s time for me to start over.

I gave the Harlequin boys a chance to change. A chance to prove that history wasn’t just set to repeat itself. But they failed with spectacular colours.

Maybe it’s time for me to stop running. After all, Sunset Cove has been living under the Harlequins’ thumb for far too long. It’s time to set our demons free and let them burn this place to the ground. Who knows if I’ll survive the fallout?
But I guess I’ll soon find out if dead girls can die twice.

This book was fantastic. The characters are brilliant and the storyline is great.

Rogue is a fantastic character. She’s strong-willed and I love her snark towards the boys. She has a unique relationship with each of the boys. She’s just brilliant.

I loved Maverick in this book. It was interesting to learn what he went through and you can understand why he is the way he is. He’s such a broken boy, and his relationship with Rogue is great. She’s just as broken.

I love JJ. He’s just so genuinely nice. I love his relationship with Rogue and I love how he’s changed his lifestyle because of her. The scenes of him trying to make up the money in the Dollhouse had me laughing.

Fox is alright, but he’s so possessive and he’s not giving Rogue what she needs. I completely understand how she feels and acts towards him. I was struggling to like Chase most of the way through this book…until the end. He deserved everything he got for what he did, but the ending was too much. He’s had his punishment and I think his actions at the end made up for it. To end the book like that…damn you Celestial authors.

I hate that man. He’s awlful and I hope he gets everything he deserves eventually.

Luther intrigues me. His actions in this book have made me almost like him when I feel like I shouldn’t. I don’t want to like him. I don’t kniw whether to believe what he says or not. Will he screw everyone over or not? Only time will tell.

Overall, I would definitely recommend this book. The series is amazing. The characters are brilliant and the storyline is great.